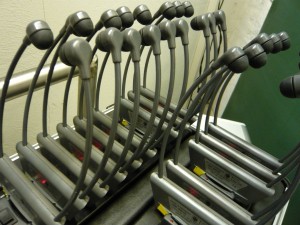 We use the term simultaneous interpreting for the type of interpreting that is performed on the spot and in a manner parallel to the discourse. In other words, the message is rendered while the speaker is still talking, which means that the original discourse and the interpreting overlap.

This mode serves as an umbrella under which there are various specialties such as chuchotage, or whispered interpreting, relay or chain interpreting, and sight translation. More information about these specialties can be found in the corresponding headings, where the main differences between them and simultaneous interpreting are clarified.

The most relevant characteristic of simultaneous interpreting is that it is performed in real time and with the use of technical equipment. This mode is performed in closed booths, equipped with microphones, headphones and recorders. Normally, under ideal conditions, the booths are made to accommodate two interpreters that take turns interpreting, since each of them should not work for more than half an hour or forty minutes at a time. Also, the interpreters need to be able to clearly see the main room from the booth, as well as all possible visual aids that the speaker uses.