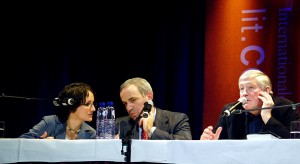 The interpreter is often forced to sit in an uncomfortable non-ergonomic position (leaning toward the recipient). They may also have difficulty concentrating in unfavorable or noisy conditions where there are distractions and people talking at the same time, while they try to adapt their posture and the tone of their voice so that they don’t bother the recipient or the other people around them that don’t need an interpretation.